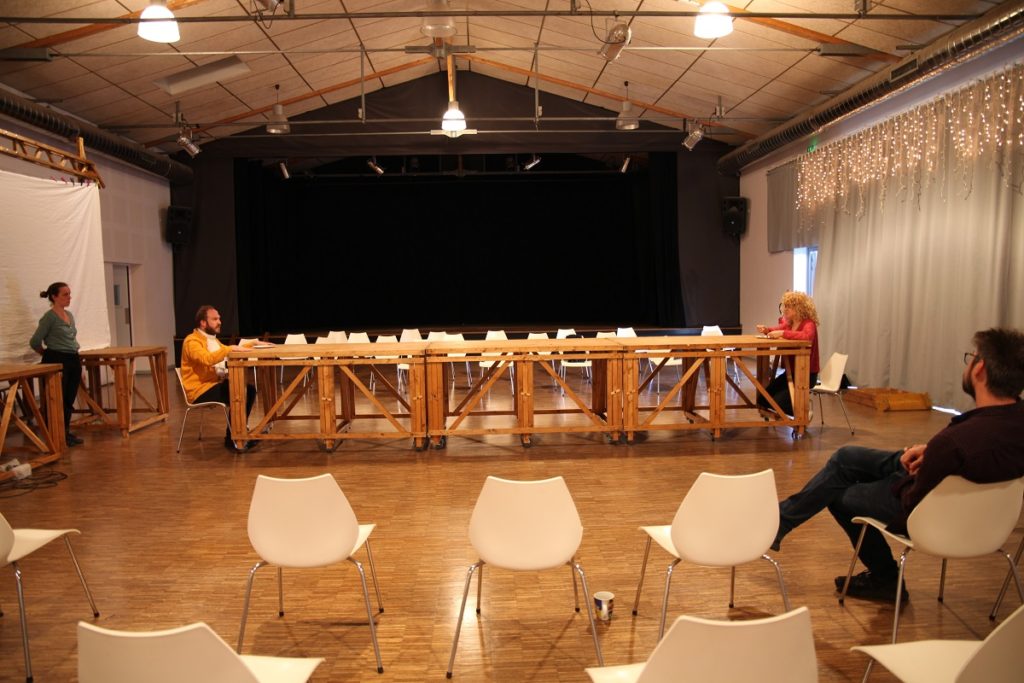 Created in February 2014 by Augustin Roy and Manon Rivier, in Rouen, the Compagnie les Incomestibles defends a popular and demanding theater. Its vocation is to address a wide audience, including those who do not spontaneously go to the theater. Refusing to produce shows that are easy to consume, it seeks to create works that “stand up to the test”, not leaving the spectators passive but pushing them to invest themselves and take a stand.

Since 2018, the Compagnie les Incomestibles has undertaken the creation of a trilogy on Molière based on Mikhail Bulgakov’s “Le Roman de Monsieur de Molière”: a narrative on his life in 3 short forms (50 min) that could as well form a whole as exist independently of each other. The project also wants to write and perform the story of a present-day troupe that tells the story of a past troupe.
– Episode 1: “The Vocation”, an episode performed outdoors, on trestles.
The young Jean-Baptiste Poquelin seems to have a destiny all mapped out for him: he will be the king’s upholsterer like his father and grandfather before him. However the young man burns with a devouring passion: the theater. He dreams of becoming a great tragedian. In this episode, we will follow Molière from his difficult beginnings to his first successes.
– Episode 2: “The Fight”, an episode performed indoors (village hall, common room, gymnasium) with a bi-frontal format (audience on both sides of the stage).
Molière was now recognized, but for him, trouble accompanied success. Each of his plays was controversial and he had to fight on all fronts. His caricatures provoked violent reactions. His successes earned him the jealousy of the artistic world. He has to fight against censorship.
– Episode 3: “La trace”, episode played in theaters.
Molière is at the height of his fame. His genius is recognized by almost everyone. Only one person still questions his talent: himself. His private life is marked by failures. His young wife does not love him and he gradually becomes like the characters he has so often mocked: an aging man, jealous, cuckolded and hypochondriac.

The work schedule of the project foresees an alternation of writing, directing and performing the episodes as they are created over 3 years.
We met the troupe in Clères (Normandy) at the end of the residency for episode 1 of the Molière trilogy. We are seduced by the freshness and energy of the work in progress. We then imagined supporting them by financing the cost of a distribution manager who would enable them to acquire better visibility with professionals at festivals that were to program this first show in the summer of 2020.

Because of the cancellations of the festivals linked to the Covid-19 epidemic, we decide together that our help will be focused on the work of staging and rehearsals of the second episode of the Molière Trilogy, as well as on the recording of videos of the finalized episodes.

“Like the entire performing arts sector, our company is experiencing difficulties related to the health crisis. The help of the Fonds Régnier pour la Création has been salutary for us. The financial aid that was initially intended to promote the distribution of our show was redirected in record time to adapt to our needs in a time of crisis. This flexibility allowed us to resume our rehearsal work in May 2020. This would have been impossible without the Régnier Fund. The assistance also allowed us to fund videos to show our work to professionals despite the limited broadcast space available during this time.” Augustin Roy